A Defense of Theory: Interpretation as an Adventure on the Border Line 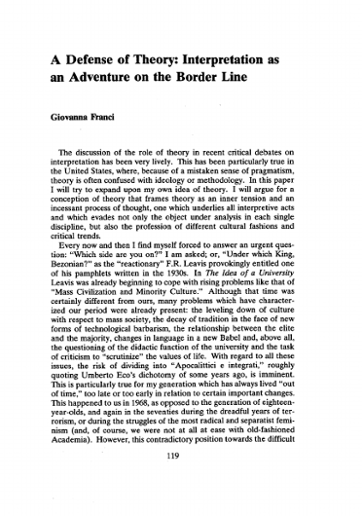 The discussion of the role of theory in recent critical debates on interpretation has been very lively. This has been particularly true in the United States, where, because of a mistaken sense of pragmatism, theory is often confused with ideology or methodology. In this paper I will try to expand upon my own idea of theory. I will argue for a conception of theory that frames theory as an inner tension and an incessant process of thought, one which underlies all interpretive acts and which evades not only the object under analysis in each single discipline, but also the profession of different cultural fashions and critical trends. Every now and then I find myself forced to answer an urgent question: "Which side are you on?" I am asked; or, "Under which King, Bezonian?" as the "reactionary" F.R. Leavis provokingly entitled one of his pamphlets written in the 1930s. In The Idea of a UniversityLeavis was already beginning to cope with rising problems like that of "Mass Civilization and Minority Culture." Although that time was certainly different from ours, many problems which have characterized our period were already present: the leveling down of culture with respect to mass society, the decay of tradition in the face of new forms of technological barbarism, the relationship between the elite and the majority, changes in language in a new Babel and, above all, the questioning of the didactic function of the university and the task of criticism to "scrutinize" the values of life. With regard to all these issues, the risk of dividing into "Apocalittici e integrati," roughly quoting Umberto Eco's dichotomy of some years ago, is imminent. This is particularly true for my generation which has always lived "out of time," too late or too early in relation to certain important changes. This happened to us in 1968, as opposed to the generation of eighteenyear- olds, and again in the seventies during the dreadful years of terrorism, or during the struggles of the most radical and separatist feminism (and, of course, we were not at all at ease with old-fashioned Academia). However, this contradictory position towards the difficult relationship between a changing society and the values to be preserved, between realism and utopia, also contains positive aspects. The presence of such positive aspects is the reason why certain deconstructive criticism, or negative hermeneutics, from the seventies onward has attracted my attention. This interpretive stance was based not on final certainties, but rather on a continuous questioning, both in politics and in literary criticism. How, then, does a member of the "out of time" generation describe the current historical moment? The socialist dream of setting oppressed people and women free has never come true, at least not in the ways expected or wished for in the past. The end of ideology, the actual as well as metaphorical collapse of walls, has annulled the old opposition between blocs: capitalism and communism, reaction and revolution, the right and the left, the reactionary and the conservative. In Europe the debate is now rendered in postideological terms, even with an unprecedented breakdown of political credibility in Italian politics, or, even more tragically, in the face of the terrible civil war in the former Yugoslavia. The confusion of ideas following the crisis of foundations has created contradictory phenomena that mix various aspects of the same problem. Instead of radically claiming the right to equality, as in the past, today it is the idea or right to difference that is radically claimed. Claims to difference, which made their appearance in Europe during the seventies (especially as a consequence of the influence of psychoanalysis), have now resurfaced in both Europe and America. Thus, left-wing ideas, once dead in the old continent, have paradoxically moved west into the country that was once seen as the natural center of capitalism. The inclination to generalize, to judge on the basis of the most important problems and universal categories valid for everybody, must now not only come to terms with a world characterized by the global circulation of ideas, but also with subtle changes which require that we pay attention to different realities.

Yale Journal of Law & the Humanities