Challenging the Apartheid of the Closet: Establishing Conditions for Lesbian and Gay Intimacy, Nomos, and Citizenship, 1961-1981 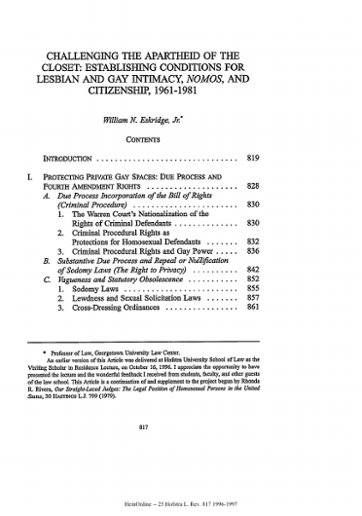 Gay liberation was not a simple phenomenon but involved three interrelated struggles, all of which challenged the philosophy of the closet. The term "coming out" originally meant one's first sexual experience with someone of his or her own sex, and rejection of the closet began with intimate sexual expression. Conservatives in the 1950s and 1960s considered homosexual conduct criminal, and even most liberals thought homosexual intimacy weird and unhealthy even if tolerable for pragmatic reasons. An increasing number of gay people rejected these assumptions and asserted that they could live sexually fulfilled and integrated lives, so long as they were left alone by nosy state agents. Gay liberation's initial struggle, therefore, was to ensure opportunities for homosexual intimacy, which could be accomplished by protecting private gay spaces (Part I). These private spaces included the home, the automobile, and, for many gay men, the enclosed toilet stall and sex club booth as well. After World War II, lesbians and gay men flocked to distinctive subcultures in the big cities (New York, Los Angeles, San Francisco, Chicago, Washington, D.C.). In the 1950s, some gay people used the term "coming out" in its most old-fashioned sense, as an introduction of the gay person to those gay subcultures. Middle-class society was appalled by the subcultures and sought to suppress them. Agents of suppression included the local police and the FBI, liquor control boards and their spies, state and federal censors (including postal inspectors and customs agents), and university administrators. Where gay people sought connection and affirmation with others of their preference, mainstream society just saw a conspiracy of sickos and criminals. A second struggle, therefore, was for gay people to create their own nomos (normative community), which required asserting control over the territory of gay subculture: gay bars and restaurants, social and educational organizations, literature and erotica, movies and radio programs (Part II). A third struggle, for full gay citizenship, was not really feasible until progress was made in the earlier two struggles. Only after a normal degree of privacy and association was assured for gay people could many of them even aspire to equal treatment as immigrants and citizenship applicants, public and private employees, soldiers, couples, and even parents. It was not until the 1960s that many gay people started to deploy the term "coming out" to denote expression of homosexuality to outsiders. Only after the Stonewall riots in 1969 did large numbers publicly self-identify as gay: they claimed space in public culture (Part III). That claim triggered the most resistance. Even after Stonewall, the government remained committed to a tolerant closet, where gay people would be safe from persecution so long as they were publicly silent about themselves. ("Don't ask, don't tell.") By the 1970s, however, silence was impossible, and the demands of screaming queers were grating as well as unacceptable to mainstream America. Indeed, arguments for homosexual equality helped reenergize traditionalist politics in America. Traditionalists were most successful when they could credibly claim that equality for gay people threatened third parties-children and homophobic coworkers--with harm or was institutionally disruptive.