Opening Stem Cell Research and Development: A Policy Proposal for the Management of Data, Intellectual Property, and Ethics 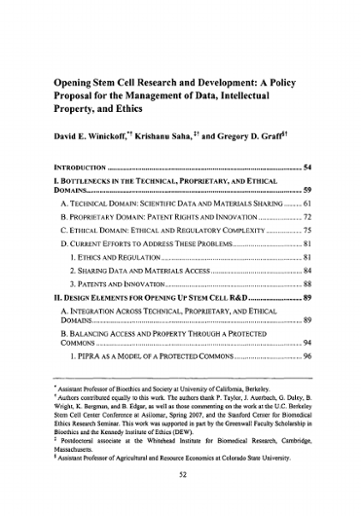 Intellectual property scholars and the biomedical community have noted a decline in the tradition of openness and sharing in the biomedical sciences over the past thirty years. This decline appears to be a function of multiple factors. First, and best known, are changes in intellectual property (IP) law, specifically the Federal Circuit's re-interpretation of patent law to expand the scope of patentable claims; the passage of the Bayh-Dole Act of 1980, allowing universities to patent inventions made in the course of federally-funded research; and the creation of new legal rights and mechanisms for the privatization and commercialization of scientific data. Second, and perhaps as a direct consequence, universities and their life science researchers have significantly increased interaction with the private sector, whether through accepting sponsored research, licensing IP, or spinning off companies. These activities have dramatically increased the exchange of discoveries, capital, and labor across the industrial-academic interface, and they have added more private money to the mix of research support for university life sciences. But the increase in university participation in economic life has also introduced tensions between the emerging commodification of knowledge and longstanding scientific norms regarding open access and dissemination of research results, data, research tools, and other scientific advances. In traditional sociological accounts, the advance of science is predicated upon mechanisms of open information, peer review, and materials exchange, which are socially reinforced by norms that undergird open access. Knowledge that is withheld from community scrutiny cannot be validated or agreed upon by the community. On this basis, it is presumed that greater degrees of openness promote not only efficiency in the advance of science, but also trust in the scientific endeavor by society. Moreover, in standard economic accounts, the mechanisms of open exchange also have important efficiency, equity, and ethical implications in terms of the direct contributions that science makes to social welfare, particularly in the development of new technologies, products, and services. In theory, actors across industrial and state sectors can put scientific knowledge to efficient and equitable use when it is freely accessible as a public good, assuming full information and virtually costless transactions. When the results of scientific investigation are withheld in secrecy or maintained as private property, practical applications may be delayed, directed only towards lucrative markets, or priced in ways that are socially inefficient or unjust. However, it is not clear that efficiency and equity in the applications of science are always better served by greater openness. In terms of efficiency, openness can introduce a "free rider" problem, undermining incentives to invest in developing scientific discoveries that can contribute to social welfare. Indeed, this is arguably why our IP laws grant private exclusive rights for inventors to develop inventions into useful applications. Furthermore, in terms of equity, as Chander and Sunder argue in The Romance of the Public Domain, freely accessible materials and information are not necessarily accessed equally by all: Those with greater ability to exploit an open access information resource, such as those with greater knowledge, social stature, or control over complementary assets, will tend to benefit disproportionately. They suggest, however, that "[t]here are strategies available.., to help ... restructure the distribution of benefits ... especially the possibility of creating 'limited commons property' regimes for. . . information."' The solution for greater efficiency as well as equity in the exploitation of science, it seems, lies in finding a proper balance or hybridization between openness and enclosure, public good and private asset. Striking the most efficient and equitable balance between public and proprietary science is quite difficult in practice, in no small measure because the very categories of basic and applied science are breaking down in practice. Nevertheless, many legal commentators warn that with Bayh-Dole, the pendulum may have swung too far towards a private competitive model of university science.