The Right to Be Fat 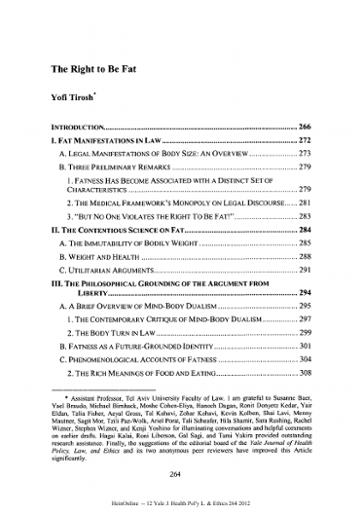 Why say "Inside every fat person there is a thin person waiting to get out." For me, it's more like "Inside every fat person there is an even fatter person waiting get out."' In its now famous paragraph from Planned Parenthood of Southeastern Pennsylvania v. Casey, the Supreme Court tried to delineate the scope of liberty that the Constitution guarantees: Our law affords constitutional protection to personal decisions relating to marriage, procreation, contraception, family relationships, child rearing, and education. . . . These matters, involving the most intimate and personal choices a person may make in a lifetime, choices central to personal dignity and autonomy, are central to the liberty protected by the Fourteenth Amendment. At the heart of liberty is the right to define one's own concept of existence, of meaning, of the universe, and of the mystery of human life. Beliefs about these matters could not define the attributes of personhood were they formed under compulsion of the State . . .. As one would expect from a text that takes on the considerable task of outlining the scope of liberty, the Court's words are emotive. They seem to convey a sense of the core dimensions of being and the amalgam of perspectives, choices, and practices that make individuals who they are. These are components so personal and vulnerable that the government should refrain from interfering with them. The Court's conceptual framework concerning abortion here is useful when we try to determine the scope of constitutionally protected liberty, because it invokes an intuition about the most basic and private aspects of our lives - those aspects that are most one's own and should not require any explanation or be subjected to any State intervention. What else in life, like the decision about whether to have an abortion, lies at the heart of liberty in that it defines one's concept of existence, of meaning, and of the mystery of human lives? What other views, choices, and ways of living should not be "formed under compulsion of the state?" While some rights, such as free speech or religious freedom, clearly fall within this protected realm, there are territories of human existence that also lie at the heart of our liberty and define how we live, but are yet to be recognized as such by constitutional theory. In this Article, I visit one such uncharted territory and argue that American law should recognize a new realm of liberty: the realm of body size. Recognizing the right to be any body size as part of the general principle of liberty (and, more specifically, as part of autonomy and dignity) would entail that we cautiously scrutinize governmental policies aiming to create incentives for losing weight or deterrence against gaining weight, as well as some acts by private actors, and balance them vis-à-vis their potential infringement of the right. My principal contention is that the law has been blind to body size and shape, eating habits, and movement and exercise practices, due to a dualistic understanding of the relationship between mind and body. However, decisions pertaining to these domains of experience lie at the core of human existence, no less so than questions such as whether to become a parent, which church to join, or what views to hold and express. Due to economic, technological, and cultural changes, body size and the practices associated with it (such as dieting, exercising, and surgery) have become more meaningful in the lives of American legal subjects than ever before. Body size plays a role in shaping individual and social identity, but also it has become a central arena for policymakers, who routinely recruit the law in creating regulative instruments to encourage the slimming down of the U.S. population.