The Reception of the ECHR in National Legal Orders 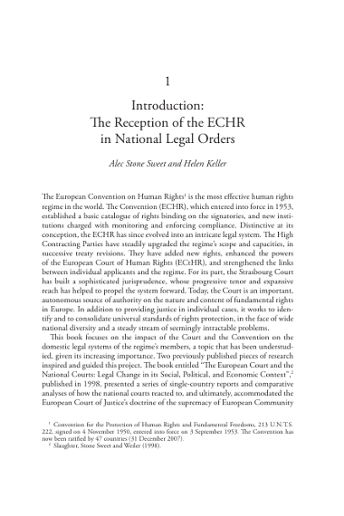 The European Convention on Human Rights is the most effective human rights regime in the world. The Convention (ECHR), which entered into force in 1953, established a basic catalogue of rights binding on the signatories, and new institutions charged with monitoring and enforcing compliance. Distinctive at its conception, the ECHR has since evolved into an intricate legal system. The High Contracting Parties have steadily upgraded the regime’s scope and capacities, in successive treaty revisions. They have added new rights, enhanced the powers of the European Court of Human Rights (ECtHR), and strengthened the links between individual applicants and the regime. For its part, the Strasbourg Court has built a sophisticated jurisprudence, whose progressive tenor and expansive reach has helped to propel the system forward. Today, the Court is an important, autonomous source of authority on the nature and content of fundamental rights in Europe. In addition to providing justice in individual cases, it works to identify and to consolidate universal standards of rights protection, in the face of wide national diversity and a steady stream of seemingly intractable problems. This book focuses on the impact of the Court and the Convention on the domestic legal systems of the regime’s members, a topic that has been understudied, given its increasing importance. Two previously published pieces of research inspired and guided this project. The book entitled “The European Court and the National Courts: Legal Change in its Social, Political, and Economic Context”, published in 1998, presented a series of single-country reports and comparative analyses of how the national courts reacted to, and ultimately, accommodated the European Court of Justice’s doctrine of the supremacy of European Community law. One premise of that earlier volume, which we share, is that national judges are important actors in their own right in the process through which European law becomes effective in national legal orders. This volume’s scope is somewhat wider, in that the reports examine the role of all national officials, not only judges, in facilitating or resisting the influence of the Convention. The basic template for the research was established by Helen Keller’s pilot study entitled “Reception of the European Convention for the Protection of Human Rights and Fundamental Freedoms in Poland and Switzerland” , an agenda we extended for this project. A first point of departure was the view that the Court is today institutionally well-positioned to exercise such influence. The Court has final jurisdiction over disputes concerning the content of the Convention, the compliance with the Convention of the High Contracting Parties, and the scope of its own jurisdiction (Kompetenz-Kompetenz); it has a burgeoning caseload in the form of individual applications; and it has produced a case law that defines what States owe to their own citizens under the Convention. A second point of departure was the observation that the regime’s influence on national officials and their decision making varies widely across States and across time. Indeed, as our research shows, the Court’s impact has been broad and pervasive in some States, and weak in others. Moreover, in those States that have been heavily influenced by the Convention, impact has been registered through quite different processes. How national officials use Convention norms, and the extent to which they resist or adapt to the Court’s case law, has also changed across time, sometimes radically. Our major objective, then, was to describe and analyse this variance, as systematically as possible, and to take some initial steps toward explaining it. This volume reports our results. Each of the nine substantive chapters examines comparatively what we will call “the reception of the ECHR” in two States. By reception, we mean how – that is, through what mechanisms – national officials confront, make use of, and resist or give agency to Convention rights. The book is fundamentally a work of comparative law, albeit with a twist. The project focuses empirical attention on the capacity of an international regime, and its transnational court, to shape law and politics at the domestic level. It thus addresses some of the same basic questions asked by students of the Europeanization of law and politics, of multi-level governance, and of the constitutionalization of treaty-based legal systems. The project also has a normative dimension, namely, to identify how the effectiveness of Convention rights in national legal orders has been, and can be, enhanced over time. We chart how the status of the Convention in domestic law and politics has changed over time, and examine, from a comparative perspective, the regime’s overall effectiveness.