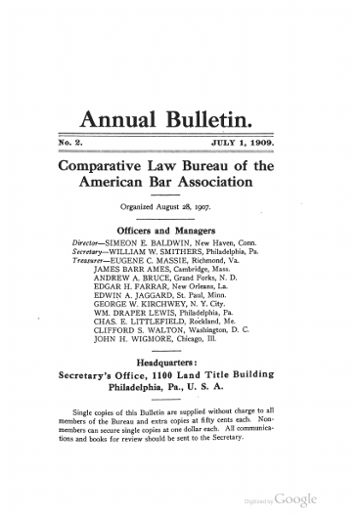 (COMPARATIVE NOTE.-See laws of France, June I4, I86S, and February I3, 1874; Belgium, June 20, 18"3; England, 1882, arts. 73 to 82; Italy, Code of Commerce, arts. 339 to 343; Roumania, Code of Commerce, arts. 364 to 369; Switzerland, Code of Obligations, arts. 830 to 837; Spain, Code of Commerce, arts. 524 to 543; Portugal, Code, arts. 341 to 343; Peru, law of October 9. 1888; Argentina, Code of Commerce, arts. 797 to 843; Bulgaria, Code, arts. 64o to 648; Scandinavia, law of 1898 (common to Denmark, Sweden and Norway); Japan, Code of Commerce, arts. 527 to 534; Austria, law of April 3, Il)06. The German law which is the subject of this article was approved by the Emperor March 11, I!)OI!. and by its terms became effective April I, 1908. A comprehensive review of it with a translation of the full text into French, comparative commentaries and copious German and French bibliographical references appeared in nos. I-2, of the I908 Revue de L'Institut de Droit Compare having been written by Maitre Fritz Norden, a distinguished barrister of the Court of Appeals, of Brussels. In view of the efforts in this country to secure the passage of a uniform negotiable instruments law by the several states, this German check law, the German law of October I, I908, concerning protests, the Brazilian Bills of Exchange and Promissory Notes law of December 3I, I908, and the English Bills of Exchange Act, of 1882, make an interesting and educative study.W. W. S.)