The Catholic Church, Sex and Sexuality in Latin America: Beyond the Public/Private Distinction 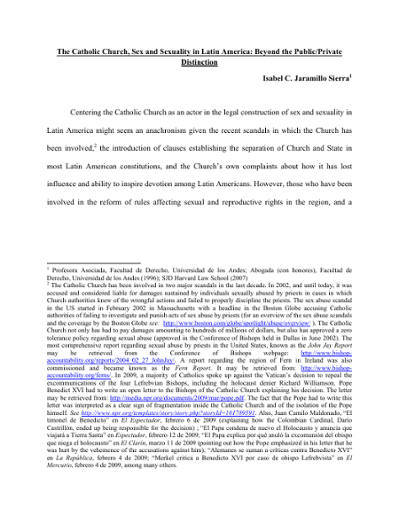 Centering the Catholic Church as an actor in the legal construction of sex and sexuality in Latin America might seem an anachronism given the recent scandals in which the Church has been involved,[1] the introduction of clauses establishing the separation of Church and State in most Latin American constitutions, and the Church’s own complaints about how it has lost influence and ability to inspire devotion among Latin Americans. However, those who have been involved in the reform of rules affecting sexual and reproductive rights in the region, and a considerable number of scholars studying these reforms, have coincided in pointing to the Catholic Church as the most important obstacle for achieving greater sex and sexual equality.[2] [1] The Catholic Church has been involved in two major scandals in the last decade. In 2002, and until today, it was accused and considered liable for damages sustained by individuals sexually abused by priests in cases in which Church authorities knew of the wrongful actions and failed to properly discipline the priests. The sex abuse scandal in the US started in February 2002 in Massachusetts with a headline in the Boston Globe accusing Catholic authorities of failing to investigate and punish acts of sex abuse by priests (for an overview of the sex abuse scandals and the coverage by the Boston Globe see: http://www.boston.com/globe/spotlight/abuse/overview/ ). The Catholic Church not only has had to pay damages amounting to hundreds of millions of dollars, but also has approved a zero tolerance policy regarding sexual abuse (approved in the Conference of Bishops held in Dallas in June 2002). The most comprehensive report regarding sexual abuse by priests in the United States, known as the John Jay Report may be retrieved from the Conference of Bishops webpage: http://www.bishop-accountability.org/reports/2004_02_27_JohnJay/. A report regarding the region of Fern in Ireland was also commissioned and became known as the Fern Report. It may be retrieved from: http://www.bishop-accountability.org/ferns/. In 2009, a majority of Catholics spoke up against the Vatican’s decision to repeal the excommunications of the four Lefrebvian Bishops, including the holocaust denier Richard Williamson. Pope Benedict XVI had to write an open letter to the Bishops of the Catholic Church explaining his decision. The letter may be retrieved from: http://media.npr.org/documents/2009/mar/pope.pdf. The fact that the Pope had to write this letter was interpreted as a clear sign of fragmentation inside the Catholic Church and of the isolation of the Pope himself. See http://www.npr.org/templates/story/story.php?storyId=101789591. Also, Juan Camilo Maldonado, “El timonel de Benedicto” en El Espectador, febrero 6 de 2009 (explaining how the Colombian Cardinal, Darío Castrillón, ended up being responsible for the decision) ; “El Papa condena de nuevo el Holocausto y anuncia que viajará a Tierra Santa” en Espectador, febrero 12 de 2009; “El Papa explica por qué anuló la excomunión del obispo que niega el holocausto” en El Clarín, marzo 11 de 2009 (pointing out how the Pope emphasized in his letter that he was hurt by the vehemence of the accusations against him); “Alemanes se suman a críticas contra Benedicto XVI” en La República, febrero 4 de 2009; “Merkel critica a Benedicto XVI por caso de obispo Lefrebvista” en El Mercurio, febrero 4 de 2009, among many others. [2] In this sense, Diego Freedman points out: “the defense of liberalism guarantees a neutral political power in which women do not find their individual freedom conditioned by the rules of religious doctrines”. Diego Freedman, “Estado laico o Estado liberal” en La Trampa de la Moral Única, Campaña por la Convención de los Derechos Sexuales y Reproductivos, Campaña por el 28 de septiembre y Tu Boca es Fundamental contra los Fundamentalismos, 2005, pp. 36-55. Also Juan Marco Vaggione: “The Church, without doubts, constitutes the greatest obstacle to the liberalization of gender and sexuality in Latin America”. Juan Marco Vaggione, “Entre Disidentes y Reactivos: Desandando las fronteras entre lo Secular y lo Religioso” in ibid, pp. 57-75. Julieta Lemaitre in an earlier version of the paper submitted for this event has also argued that the Catholic Church has intervened in political processes regarding sexual and reproductive rights in many countries in the region and asks “¿How should we react before an evident intervention of the Church as an actor with opinions and political participation”. Julieta Lemaitre, “La Iglesia Católica es un actor político ilegítimo en materia de sexualidad y reproducción… Respuesta a Juan Marco Vaggione” (unpublished manuscript on hold with the author) Also Guillermo Nugent, “El Orden Tutelar: para entender el conflicto entre sexualidad y políticas públicas en América Latina” in ibid, pp. 6-36. Mala Htun, moreover, has argued that the liberalization of legislation concerning sexual equality and sexual and reproductive rights is more strongly related to the role of the Catholic Church than to the characteristics of the political systems in the regions in terms of their democratic or non-democratic nature. See Mala Htun, Sex and the State: Abortion, Divorce, and the Family under Latin American Dictatorships and Democracies, Cambridge, Cambridge University Press, 2003.