The Supreme Court Opinion as Institutional Practice: Dissent, Legal Scholarship, and Decisionmaking in the Taft Court 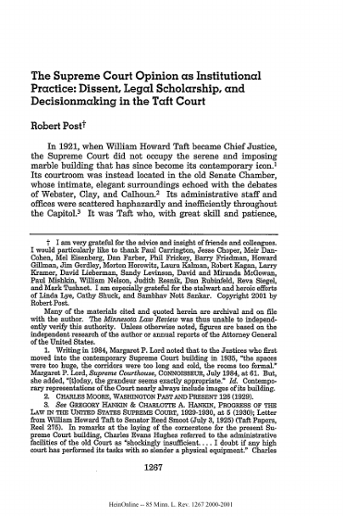 In 1921, when William Howard Taft became Chief Justice, the Supreme Court did not occupy the serene and imposing marble building that has since become its contemporary icon. Its courtroom was instead located in the old Senate Chamber, whose intimate, elegant surroundings echoed with the debates of Webster, Clay, and Calhoun. Its administrative staff and offices were scattered haphazardly and inefficiently throughout the Capitol. It was Taft who, with great skill and patience, seized the occasion to extract from Congress the resources to construct and design the present structure, which, in the words of its architect Cass Gilbert, was intended to combine "all the beauty, charm and dignity of the Lincoln Memorial" with "the practical qualities of a first-rate office building." Although Taft never lived to see the building constructed, a plaster model of it was placed beside his casket as he lay in state at the Capitol, in tribute to "one of [his] last contributions to the nation." In part, Tats success was due to what Charles Evans Hughes accurately characterized as "his intelligent persistence." But in part it was also due to the mood of the nation in the decade after World War I. Despite the notorious budgetary astringency of Republican administrations, there was a remarkable and widespread conviction that Washington, D.C. should be rebuilt "to make the national capital as splendid as our new status in the world." The spate of federal construction in the 1920s reflected "the dawning consciousness that this capital is an equivalent of the Rome of Augustus." Writing at the end of the decade, one commentator noted that "[t]he proudest boast of the Emperor Augustus was that he found Rome a city of brick nians and left it a city of marble. All Washington seem bent upon following in his footsteps and making our national capital, if not a marble city, at least a white city." The new Supreme Court building self-consciously participated in this imperial metaphor. Gilbert, who had been personally selected by Taft, designed the structure "to express the serious beauty and quiet refined splendor of a Courtroom of the classic period of Rome." The architectural reference to Rome was complex and multi-dimensional. It evoked associations of Roman law, Roman power and virtue, and the stable equipoise of secure authority. By the time the Court actually moved into its new quarters in 1935, however, it had thrown down the gauntlet to the New Deal, so that the abstract and "pure" classicism of the building acquired a hard and cold edge. It became "a building symbolic of the Court's intransigeance," a "sepulchral temple of justice." Although the building's classicism inevitably carried this potential for turning cold, empty, and isolated, in its original conception the Augustan composure of the building aspired to the quite different status of "a national symbol," bespeaking "the common cause, the unifying principle of our Nation." In lobbying for congressional support, Taft repeatedly articulated the need for a building that would embody the dignity of the Court "as the head of the Federal Judiciary, and, in a constitutional sense, the head of the Judiciary of the Nation." It was understood that "a monumental Supreme Court building" would "establish the judiciary as the equal, architecturally at least, of the legislative and executive branches of the government." Today it is natural for us to conceptualize the Supreme Court as overseeing a co-ordinate branch of the federal government. But in 1921 this was hardly a common vision. It was Taft who, as a former chief magistrate of the Executive Branch, transformed the role of Chief Justice into something analogous to a chief executive for the judicial branch of government, thereby for the first time imagining the federal judiciary as a coherent branch of government to be managed. And it was Taft who conceived and pushed through Congress the Judiciary Act of February 13, 1925, which "cut... to the bone" the mandatory appellate jurisdiction of the Supreme Court, substituting therefore discretionary review by writs of certiorari.